This booklet (click on the right to explore) shows the process of revising the Common Core made mandatory for incoming freshmen in Fall 1980. The Common Core Course Requirements will be the focus of the following analysis. 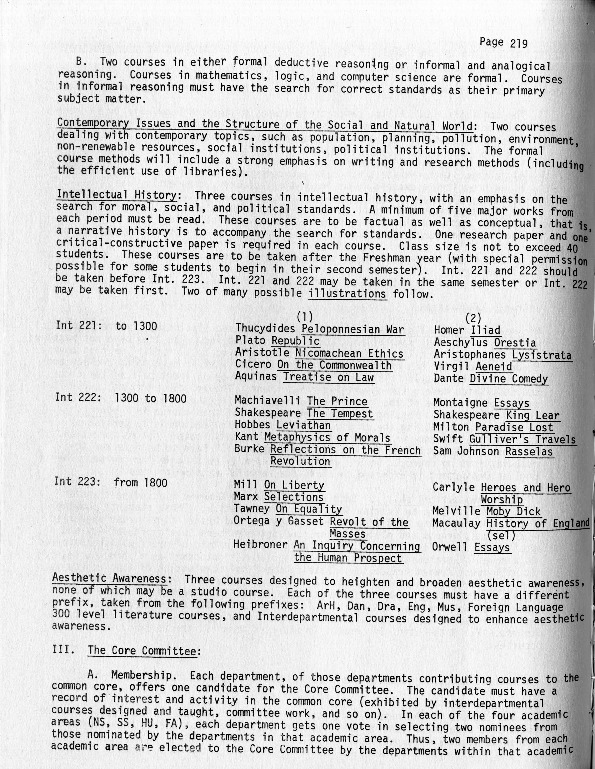 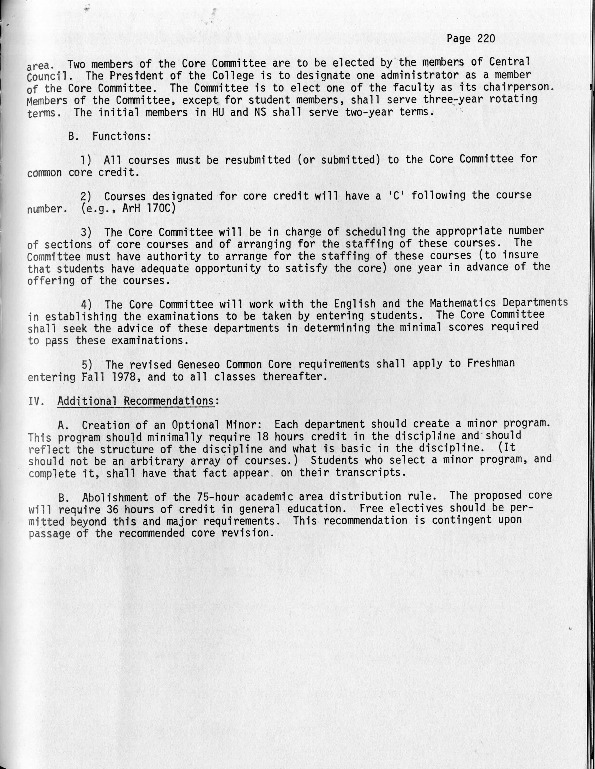 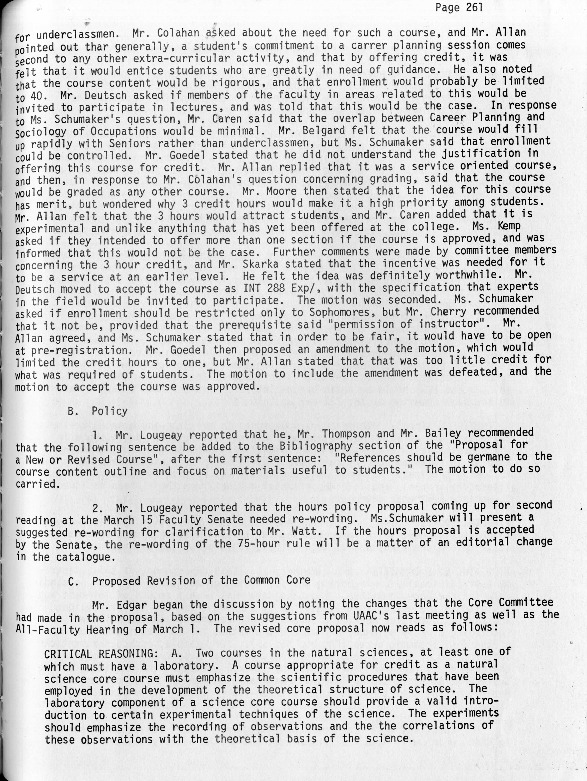 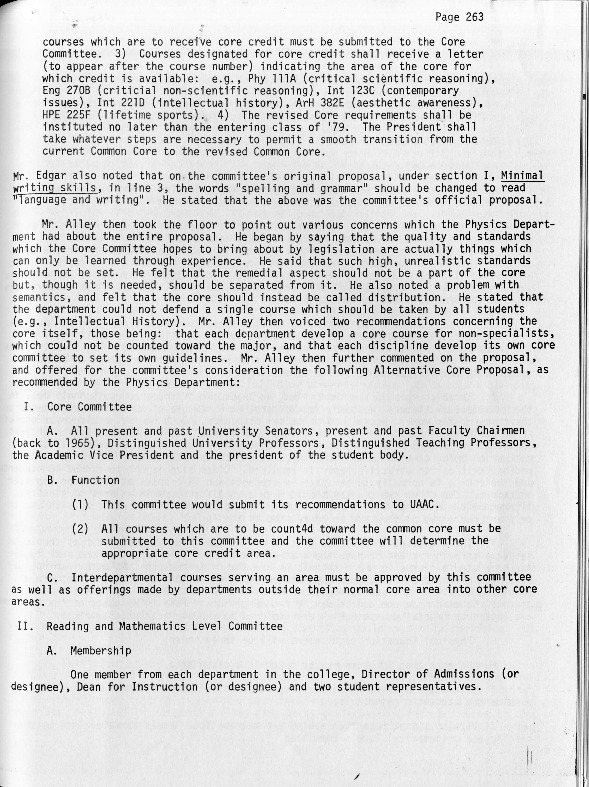 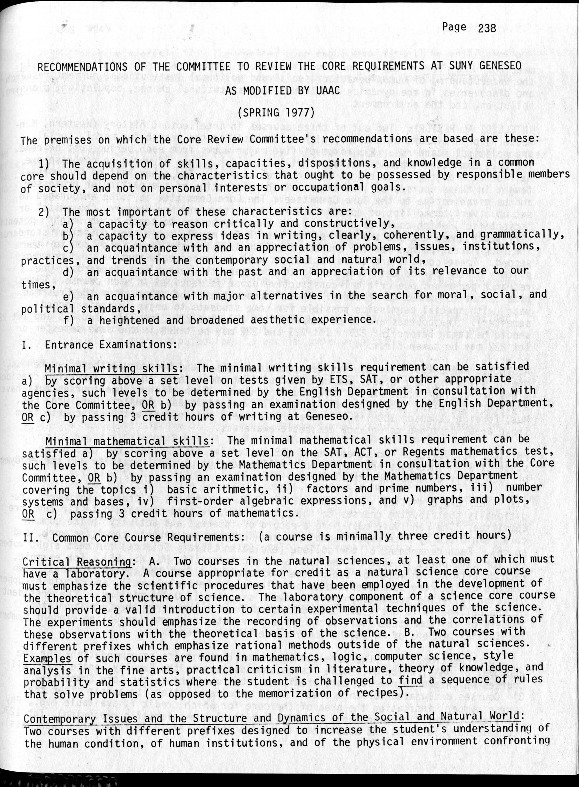 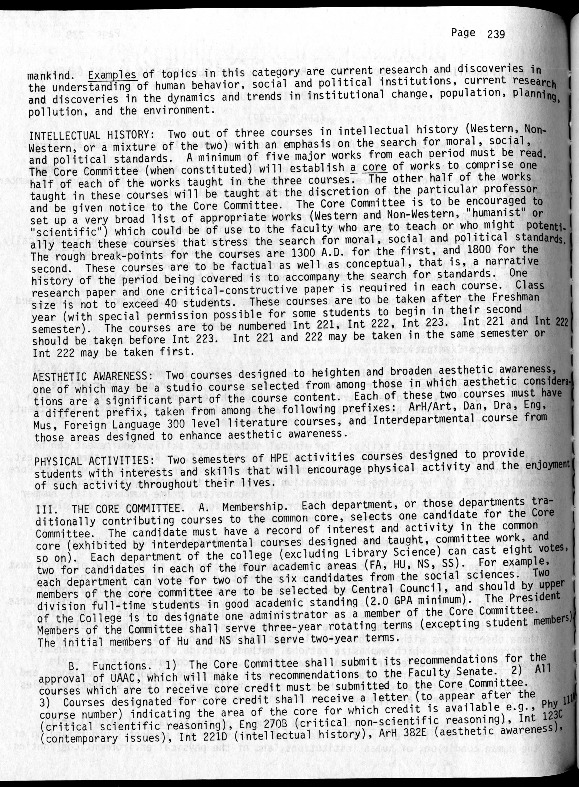 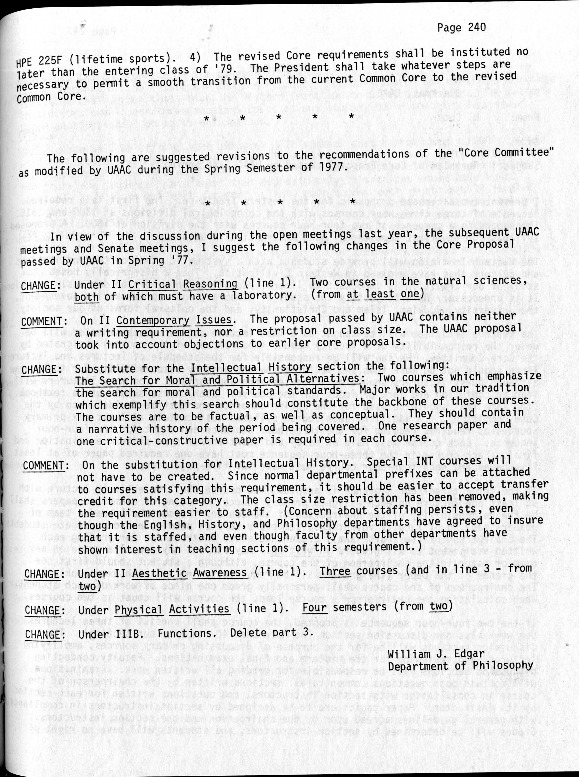 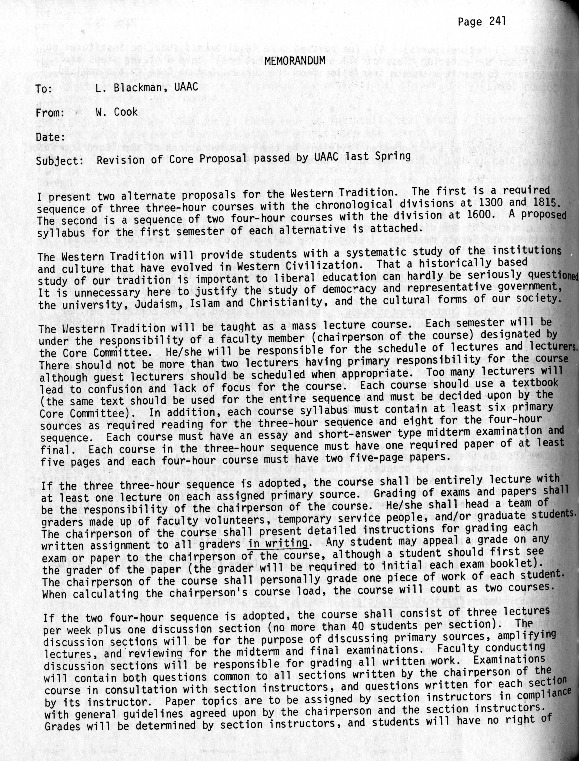 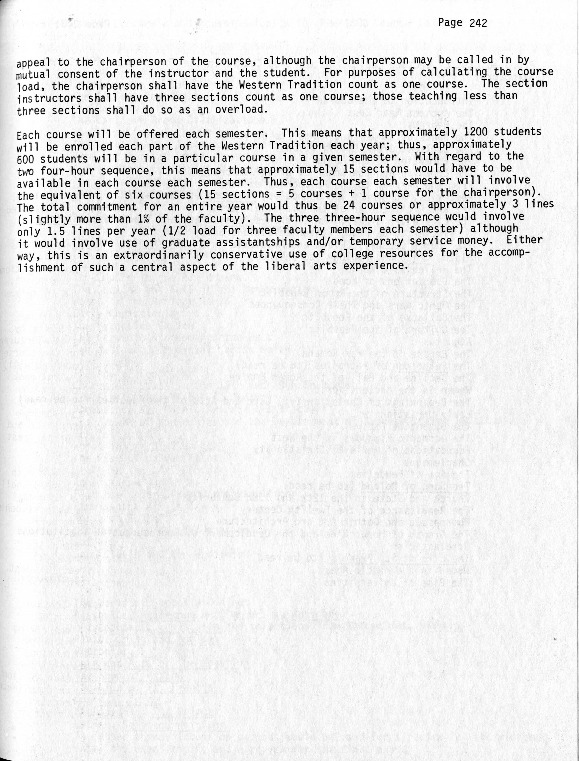 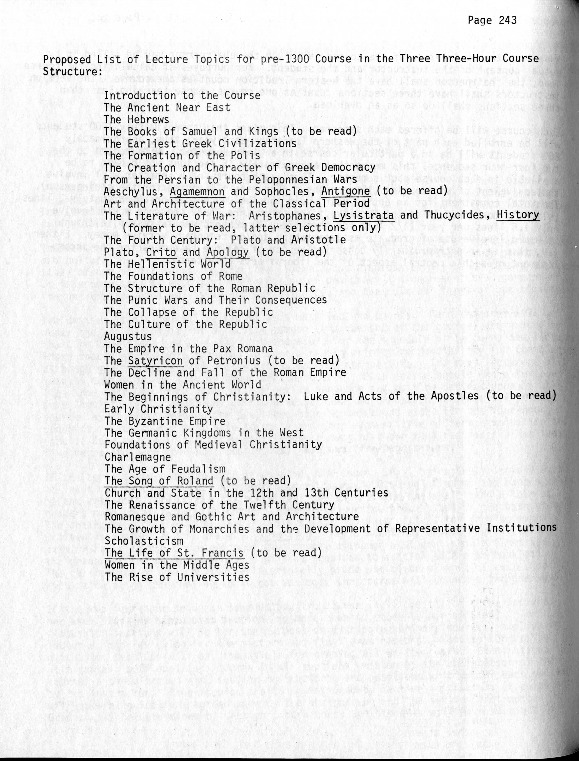 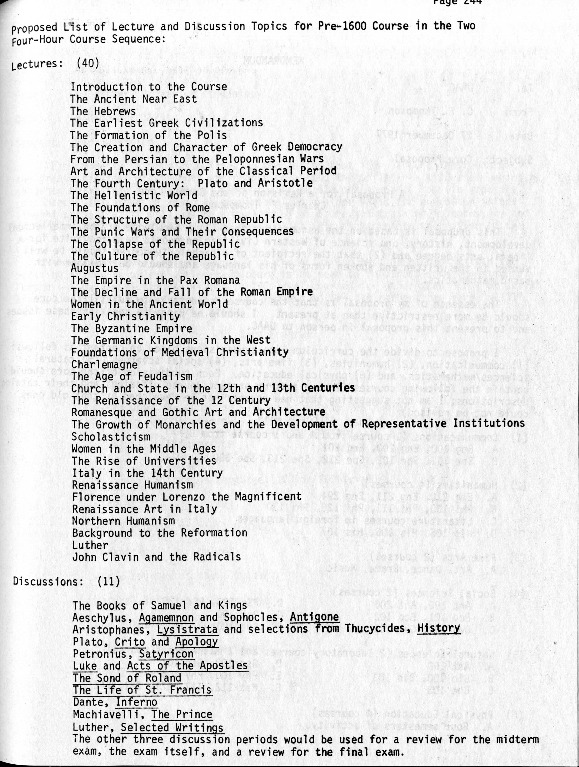 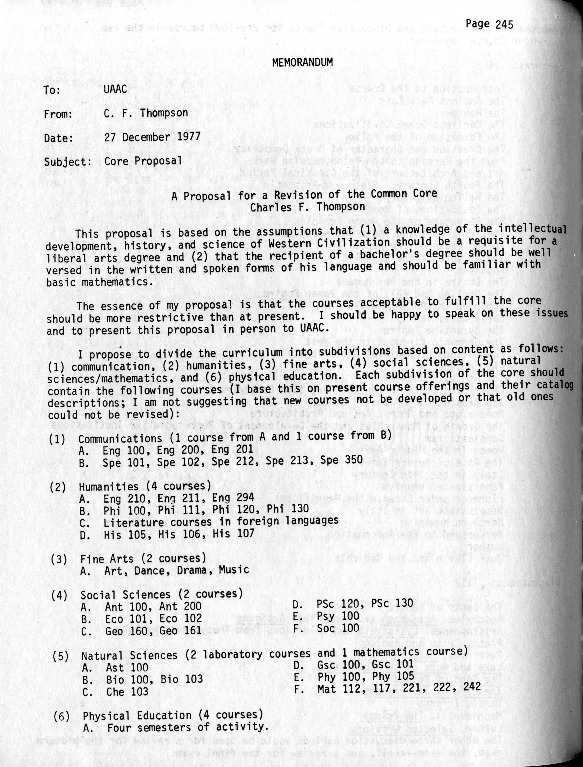 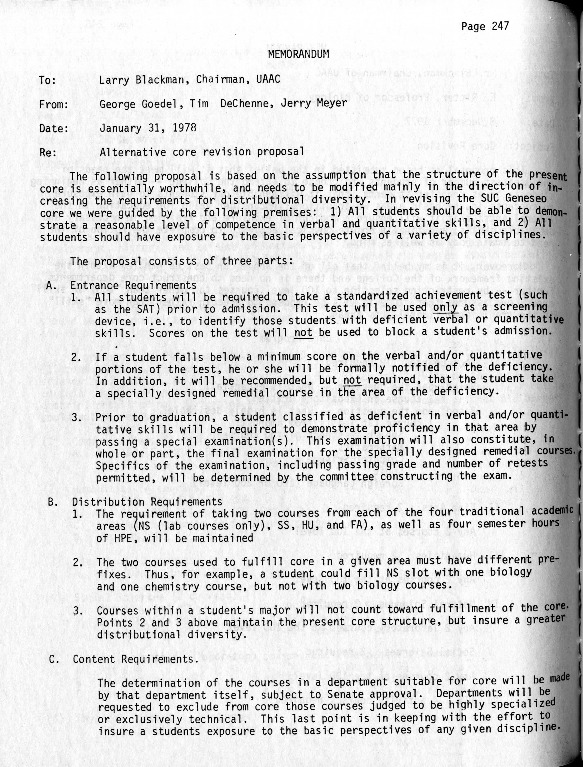 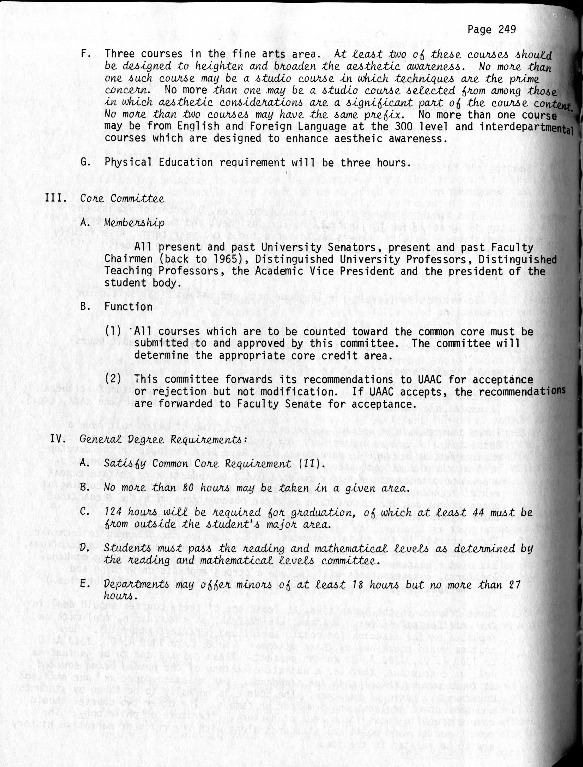 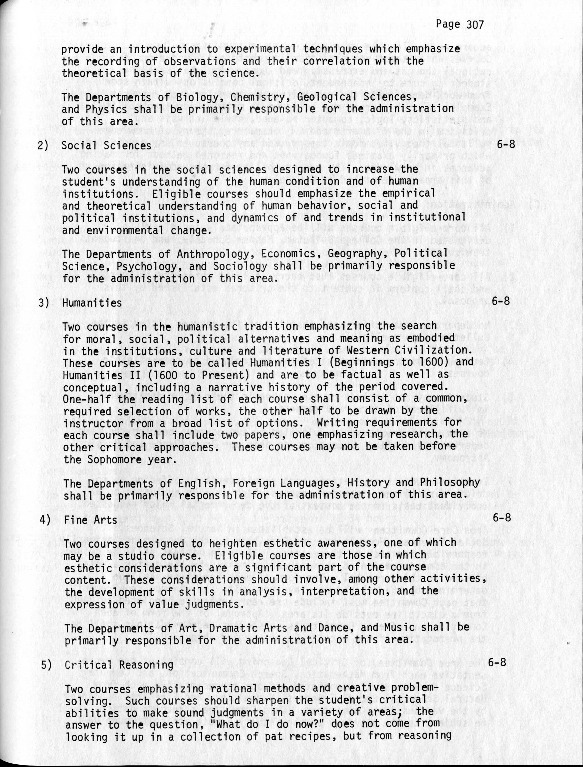 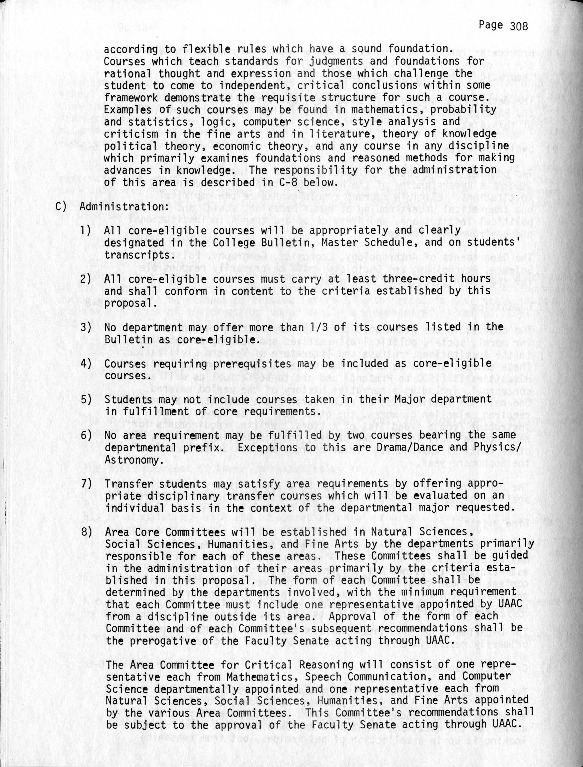 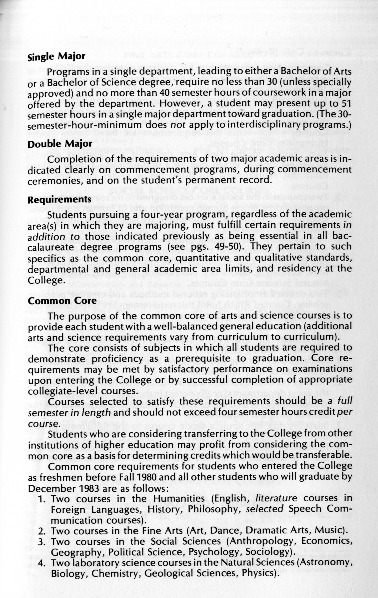 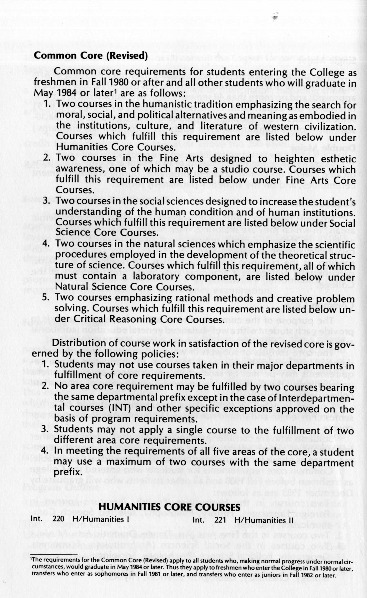 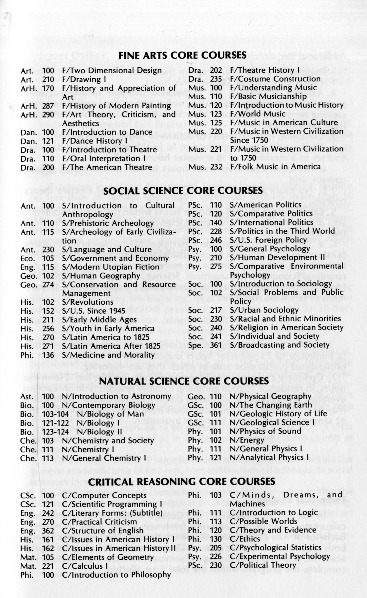 Although significant strides were not made until Spring 1977, the Common Core, in place since 1962, had been under scrutiny and review for four years leading up to these revisions. The recommendations of the Core Committee from February 1977 (booklet 2-4) were the first to be fully articulated. The required areas proposed generally had equivalents in the already-existent core, but were reframed and had clearer learning objectives. The Intellectual History requirement (eventually the Humanities sequence), which was the farthest removed from its existing counterpart (two Humanities courses selected from English, Philosophy, of literature-based foreign language) was accompanied by clearly defined course requirements and suggested texts (booklet 3).

After these recommendations were made, an All Faculty Hearing on the proposed revisions was held on March 1st, 1977. The issues of greatest concern included the omission of studio courses from Aesthetic Awareness and the “slanted” nature of the proposed core, which Professors Alley and Reid felt deemphasized science in an increasingly scientific and technological world. The Intellectual History requirement was also discussed in much detail. The amount of science needed in the courses was questioned, and Professors Deutsch and Shank requested a more detailed description of the courses, and problems that still come up regarding today’s Humanities, staffing the courses and the specifically “Western” designation, were also discussed (Faculty Senate 1976-77 233-39).

The revised proposal (booklet 5-8) reflected the topics discussed at the hearing; changes included the inclusion of studio courses in the Aesthetic Awareness requirement and more detail in the Intellectual History description. Professor Alley of the Physics Department then relayed his and his department’s concerns about the proposal, asserting that a course required for all students (Intellectual History) was not feasible. Suggested revisions from the Physics Department followed (booklet 7-8).

In an Undergraduate Academic Affairs Committee (UAAC) meeting held later that same semester on April 5th, 1977, the proposed revisions were again discussed at length. Committee members questioned the timeliness of the changes, considering possible financial and enrollment-related problems in the 1977-78 academic year. In light of probable staffing difficulties and making the requirements more efficient for transfer students, the number of required Intellectual History courses was reduced from three to two (Faculty Senate 1976-77 269-272). At a later UAAC meeting, held April 12th, the committee made the same change to the Aesthetic Awareness requirement for the sake of symmetry with the other three areas (Faculty Senate 1976-77 279).

The revisions were not significantly addressed again until Spring 1978, when proposed revisions were accepted from across the faculty (booklet 9-20). While some proposals paid particular attention to the Intellectual History element of the core, especially Edgar and Cook’s, some suggested changes for all areas of the core. In an open meeting held to discuss the proposals on February 16th, 1978, shared concerns of the faculty included creating added hardship for transfer students and staffing any new courses. Professor Cook spoke in support of his proposed Western tradition requirement (comparable to Intellectual History): “A Core requirement ought to include a component concerning the Western tradition. We have a common cultural heritage, with which a student should be acquainted. If all of the students in the College share a common knowledge, it will facilitate teaching for many faculty members” (Faculty Senate 1977-78 274-276).

The Core accepted by the UAAC on March 7th, 1978, reflected many of the proposals (booklet 21-24). The bulk of the revisions were to the names of the Area Requirements, and the previous Critical Reasoning requirement was divided into Natural Sciences and Critical Reasoning. Intellectual History was changed to Humanities, and the description and requirements of the sequence closely resemble the courses as taught in 2016. The revised Common Core was passed by the Faculty Senate on April 11th, 1978 (Faculty Senate 1977-1978 352).

This work is licensed under a Creative Commons Attribution 4.0 International License.